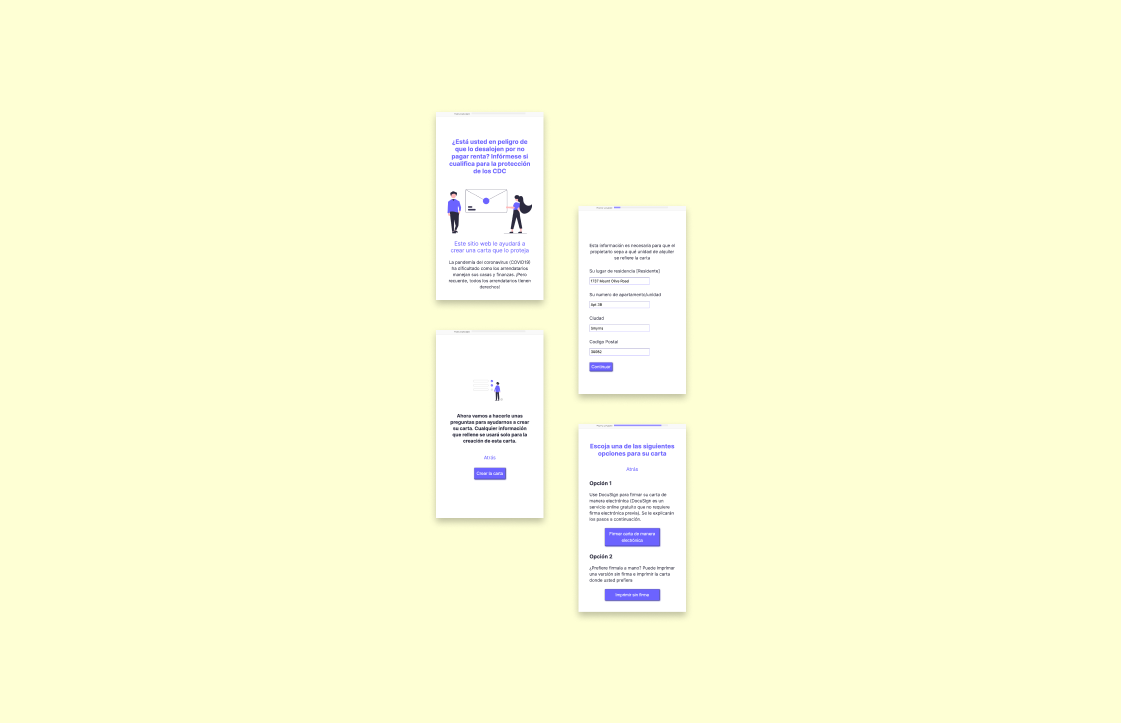 This project was a deployed website serving primarily Atlanta-area residents.

Although there are a number anti-eviction letter generators, we found that the design of existing tools were neither accessible nor reassuring to Latinx immigrant communities.

Nomasdesalojos.com (translated to No More Evictions) delivers a signed letter to the tenant without the use of email or offline printing.

The link was shared — via mass text — across 7 neighborhoods with 1,500 residents. By August 2021, nearly 300 text messages with a linked CDC declaration were delivered and the page had been visited over 1,000 times. 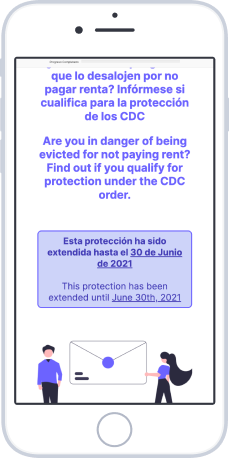 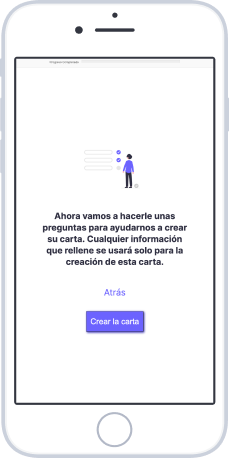 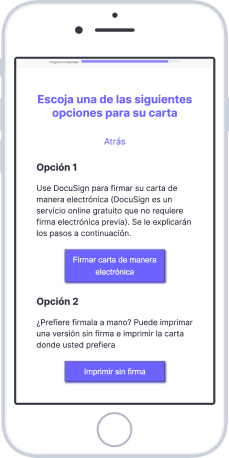 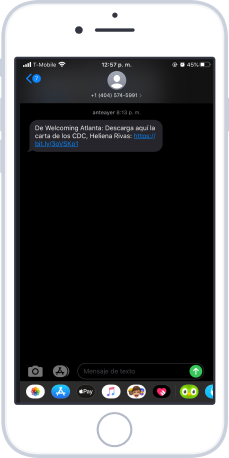 In a comparative analysis, every existing tool we encountered required the use of an email address. Problem is, many of Welcoming Atlanta's constituents do not use or have email.

As a result of this, we decided to modify the process to better accommodate the community.
‍ 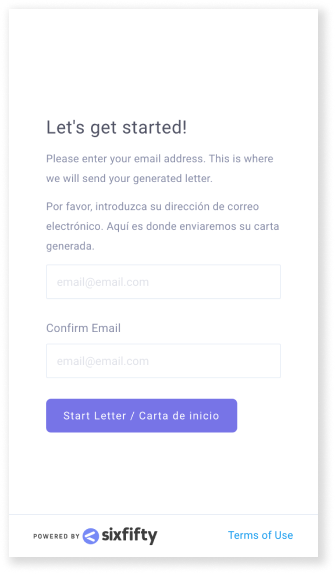 Existing tools, such as HelloLandlord depicted in the above screenshot, required an email to use. This posed as a significant technological barrier for the community.

Time was of the essence. In lieu of primary research with community members, we conducted secondary research with experts. These included interviewing staff from the Office of Immigrant Affairs and housing lawyers to better understand our target population.

Besides having limited English proficiency, tenants struggle to understand the intricacies and necessary actions they must take when presented with legal documents.

Fear of the criminal justice system

Anything involving courts or police immediately immobilizes the community. We found many were scared to file with CDC because of the potential repercussions. This fear also makes them reluctant to share or report personal data.

The community is proficient in using SMS on their cellphones, however, was not suited to input open responses (for instance, instruction to respond ‘Yes’ might instead receive invalid responses such as ‘Yes I want this.’).

Armed with these insights, we outlined the following design requirements for a new tool:

I constructed a skeleton flow of the eligibility questions organized in a flowchart. I did this by studying existing CDC letter generators.

This flowchart helped to communicate the flow of the website to the developer. We reviewed the flow with lawyers to ensure legal sufficiency.

I needed to consider how we were going to ask the questions in consideration of what we learned about the user. 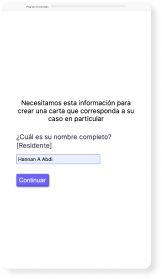 Use of personal data

Knowing how anxious our user group can be in the face of authority, it was important to explain how any personal data collected (name, address, etc.) would be used and how it wouldn’t be used.

For example, when asking for the tenant’s address and unit, we explain this information will be used in the letter so the landlord knows which rental unit is being referred. 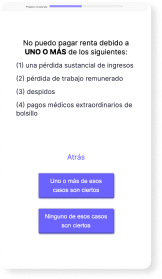 In addition, we found that answering a statement with T/F was easier to understand than answering a question with Y/N.

Question: Are you unable to pay rent due to loss of household income, extraordinary medical expenses, or..?

What's wrong: Unclear to which part of the question I am saying yes.

Statement: I am unable to pay rent due to at least one of the following: (a) loss of household income, (b) extraordinary medical expenses...

What works: Placing it in first person perspective, changing the question into a statement, and using logic operators as responses creates clarity. 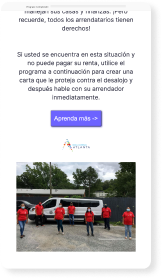 We also did what we could to make the site reassuring. The landing page includes a photo of community leaders in their familiar red shirts.

We included language that was emboldening, reminding the tenant of their due rights. The legalese of the original CDC requirements were simplified to be understandable, removing unnecessary legalese.

In line with our methods to conduct research using secondary sources, we tested a high-fidelity version of the website with community navigators: Spanish-speaking intermediaries from the community.

We observed how participants moved through the sequence of prompts, taking note of questions or points of confusion. 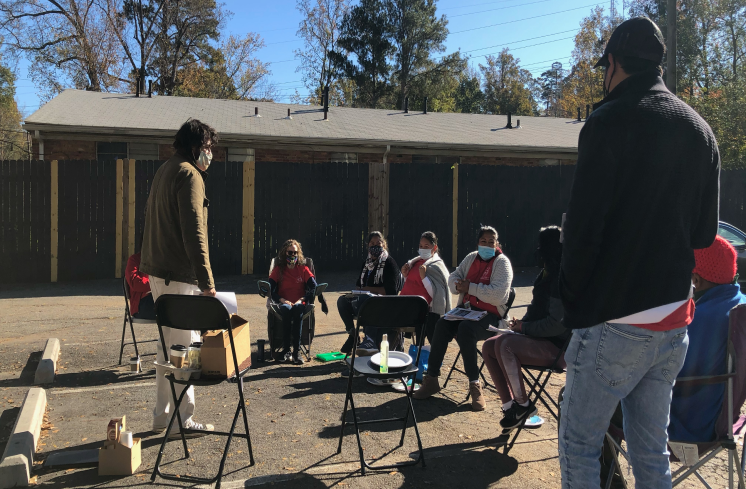 We presented the website at one of the Office’s staff meetings. We asked everyone go to the website, go through the eligibility determination process, and share ad-hoc feedback.

Some did not understand that the site was about the CDC Moratorium or that the end result would be a declaration letter, not a form of rental assistance.

‍Solution: More clearly describe this on the landing page.

Confusion about how to respond

As mentioned previously, using a Yes/No response framework proved to be difficult to interpret.

‍Solution: Use a True/False response framework.

We needed to make certain phrases more concrete, especially due to the fears of committing perjury.

We launched NoMasDesalojos.com in December 2020, working with the Office and AVLF to spread the word.

Number of texts sent per month

At its launch, the site saw a modest usage, successfully delivering between ~10 to ~30 texts (to unique phone numbers).
‍
However, in March, we saw a huge uptick in the number of texts sent. Welcoming Atlanta had just another wave of outreach because a round of promised rental assistance fell through, leaving a lot of folks in the community at major risk of eviction.
‍
Update: As August 26, 2021, the Supreme Court has overruled the CDC's authority to enact the moratorium.

There were moments in the process where we questioned whether this tool was the best solution for our users.

For example, there is no guarantee that a tenant would ever deliver the letter to their landlord (we can only track the number of texts sent out). This scenario is highly likely due to factors we do not address, including intimidation and fear of confrontation.
‍
Still, we attempted to validate and research how best to design a site that would best help residents access the eviction protection.

In parallel with this project, we were involved in other anti-eviction design projects, including Mi Casa Mis Derechos. You can read my case study here!